“President Biden’s pardons are welcome news to those who will find relief and this announcement represents the most substantive step forward on marijuana policy reform since the beginning of prohibition. President Biden has answered the call and it is critical for governors around the country to do the same, given that the majority of convictions have been issued under state, not federal law.

“President Biden’s pardon announcement serves as a stark contrast to Senate Republicans, who have been in lockstep behind Mitch McConnell in efforts to block any attempt to end the federal criminalization of marijuana for adults.

“BOWL PAC will continue to rally the majority of Americans who support cannabis reform to vote for congressional candidates who will fight for legalization at the federal level.”

Additional context: Just 15 days ago, BOWL PAC launched a public campaign to “Unleash Dank Brandon,” a play on the popular internet meme “Dark Brandon” which emerged after President Biden made good on campaign promises such as a historic healthcare and climate bill, protecting Dreamers by codifying DACA, and forgiving thousands per debtor in student loans.

More information can be found at thebowlpac.org/

Supporters of BOWL PAC’s mission can make a contribution to support the work here. 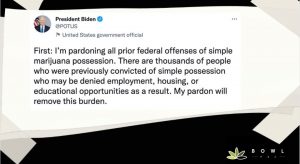 Justin’s wide-ranging policy reform expertise includes issues such as marijuana, campaign finance, tax, and wage fairness. In addition to launching BOWL PAC, he is also a Partner at Useful Strategies and Unfiltered.Media. For five years, Justin was the federal lobbyist for the National Organization for the Reform of Marijuana Laws (NORML), the nation’s largest and longest-running marijuana consumer advocacy group. Prior to joining NORML, Justin served as a legislative aide in the Virginia State Senate, where he drafted the first marijuana reform legislation introduced in the chamber, a precursor to the Commonwealth legalizing marijuana in 2021. In addition to his policy reform efforts, Justin has more than a decade of electoral campaign experience managing federal, state, and local races in 13 different states across the country.

BOWL PAC works to unify the public, interest groups, and policymakers behind a comprehensive approach to marijuana legalization and justice for those who have been harmed under its criminalization.